The IPFS stack is visualized as follows: 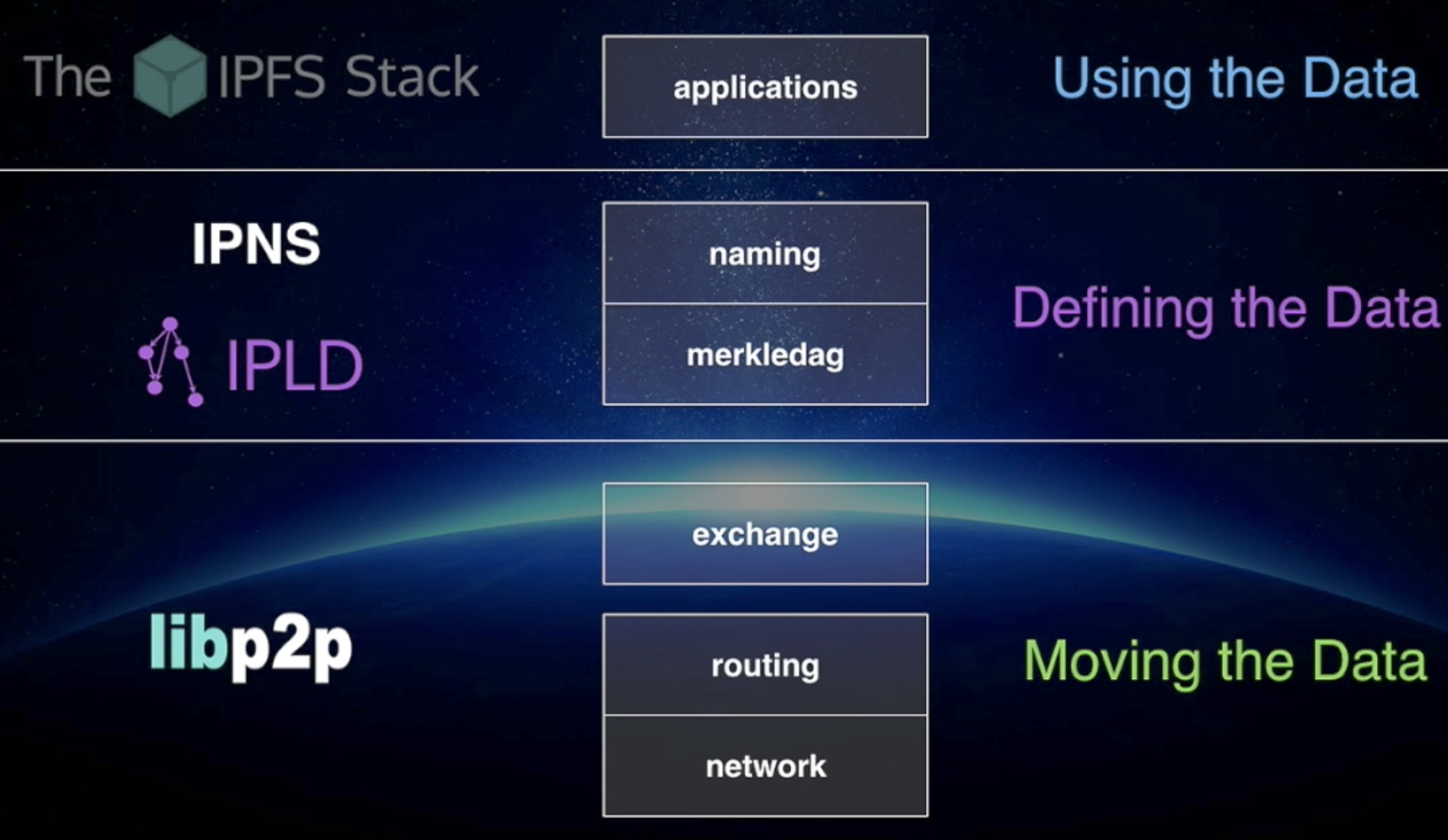 or with more detail: 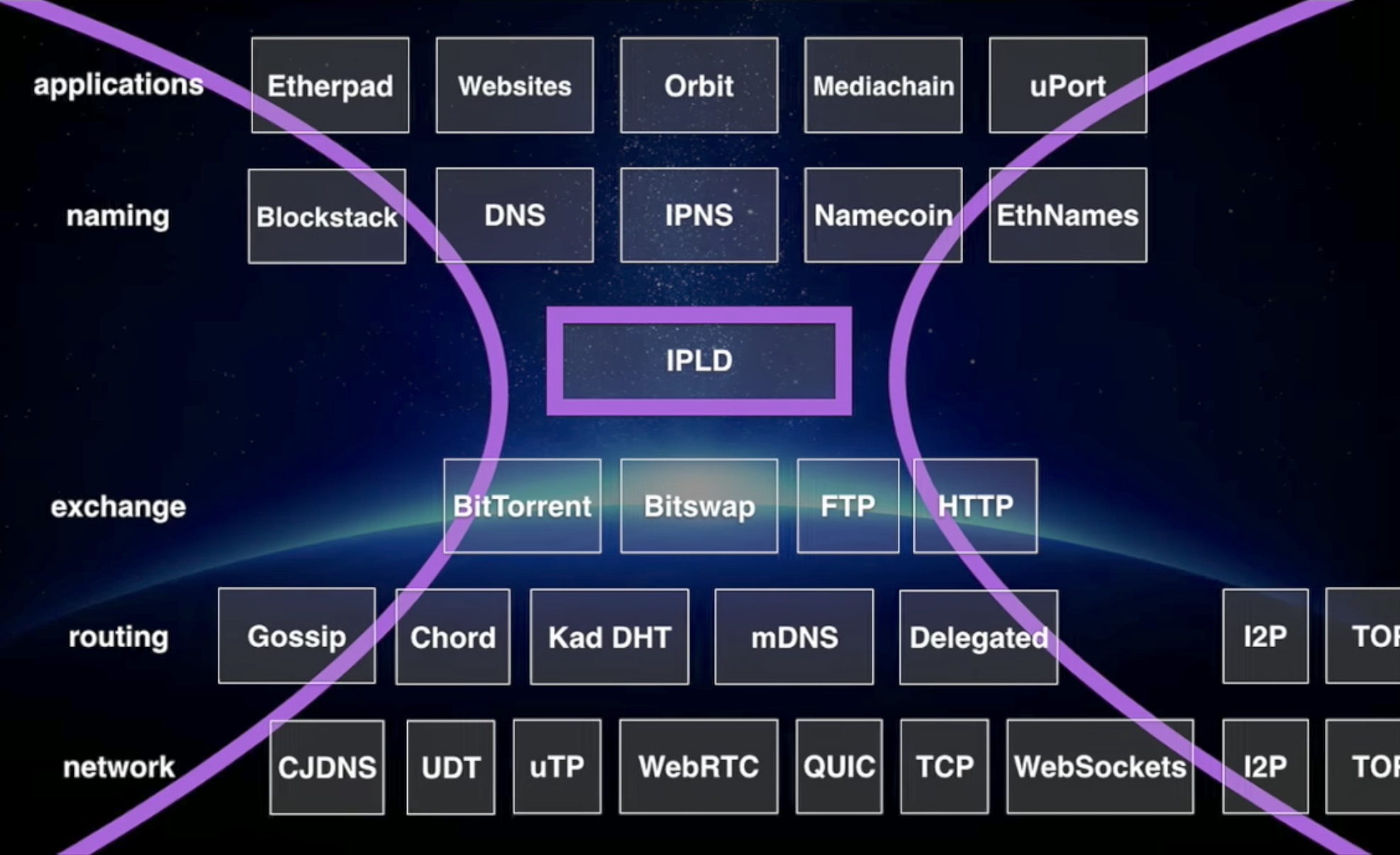 I borrowed both images from presentations by Juan Benet (the BDFL of IPFS).

The IPFS design in the white paper goes more or less through these layers, bottom-up:

The IPFS Protocol is divided into a stack of sub-protocols responsible for different functionality:

Here's my alternative naming of these sub-protocols:

Let's go through them and see if we can increase our understanding of IPFS a bit!

IPFS is a P2P network of clients; there is no central server. These clients are the nodes of the network and need a way to be identified by the other nodes. If you just number the nodes 1,2,3,... anyone can add a node with an existing ID and claim to be that node. To prevent that some cryptography is needed. IPFS does it like this:

All this is done during the init phase of a node: ipfs init > the resulting keys are stored in ~/.ipfs/config and returns the NodeId.

The actual hashing algorithm is not specified in the white paper, read the note about that here:

Rather than locking the system to a particular set of function choices, IPFS favors self-describing values. Hash digest values are stored in multihash format, which includes a short header specifying the hash function used, and the digest length in bytes.

This allows the system to (a) choose the best function for the use case (e.g. stronger security vs faster performance), and (b) evolve as function choices change. Self-describing values allow using different parameter choices compatibly.

These multihashes are part of a whole family of self-describing hashes, and it is brilliant, check it out: multiformats.

Network: talk to other clients

The summary is this: IPFS works on top of any network (see the image above).

Interesting here is the network addressing to connect to a peer. IPFS uses multiaddr formatting for that. You can see it in action when starting a node:

The routing layer is based on a DHT, as discussed in the previous episode, and its purpose is to:

The command line interface and API don't expose the complete routing interface as specified in the white paper. What does work:

ipfs put and ipfs get only work for ipns records in the API. Maybe storing small data on the DHT itself was not implemented (yet)?

Exchange: give and take

Data is broken up into blocks, and the exchange layer is responsible for distributing these blocks. It looks like BitTorrent, but it's different, so the protocol warrants its own name: BitSwap.

BitSwap is modeled as a marketplace that incentivizes data replication. The way this is implemented is called the BitSwap Strategy, and the white paper describes a feasible strategy and also states that the strategy can be replaced by another strategy. One such a bartering system can be based on a virtual currency, which is where FileCoin comes in.

Of course, each node can decide on its own strategy, so the generally used strategy must be resilient against abuse. When most nodes are set up to have some fair way of bartering it will work something like this:

So this is set up kind of cool I think: game theory in action! The white paper further describes some edge cases like what to do if I have no blocks to barter with? The answer is simply to collect blocks that your peers are looking for, so you have something to trade.

Now let's have a look how we can poke around in the innards of the BitSwap protocol.

The command-line interface has a section blocks and a section bitswap; those sound relevant :)

To see bitswap in action, I'm going to request a large file Qmdsrpg2oXZTWGjat98VgpFQb5u1Vdw5Gun2rgQ2Xhxa2t﻿ which is a video (download it to see what video!):

Thank you QmSoLMeWqB7YGVLJN3pNLQpmmEk35v6wYtsMGLzSr5QBU3; what a generous peer you are!

Now, have a look at the block commands:

We'll have another look at how blocks fit in in the next chapter.

The three layers of the stack we described so far (network, routing, exchange) are implemented in libp2p.

Let's climb up the stack to the core of IPFS...

To create any data structure, IPFS offers a flexible and powerful solution:

This way of organizing data has a couple of useful properties (quoting from the white paper):

To get a feel for IPFS objects, check out this objects visualization example.

Another nifty feature is the use of unix-style paths, where a Merkle DAG has the structure:

We'll see an example below.

This is really all there is to it. Lets see it in action by replaying some examples from the quick-start:

The Unicode characters that show up in the data field are the result of serialization of the data. IPFS uses protobuf for that I think. Correct me if I'm wrong :)

At the time I'm writing this there is an experimental alternative for the ipfs object commands: ipfs dag:

We see a couple of differences there, but let's not get into that. Both outputs follow the IPFS object format from the white paper. One interesting bit is the "Cid" that shows up; this refers to the newer Content IDentifier.

Another feature that is mentioned is the possibility to pin objects, which results in storage of these objects in the file system of the local node. The current go implementation of ipfs stores it in a leveldb database under the ~/.ipfs/datastore directory. We have seen pinning in action in a previous post.

The last part of this chapter mentions the availability of object level encryption. This is not implemented yet: status wip (Work in Progress; I had to look it up as well). The project page is here: ipfs keystore proposal.

The ipfs dag command hints to something new...

If you studied the images at the start of this post carefully, you are probably wondering, what is IPLD and how does it fit in? According to the white paper, it doesn't fit in, as it isn't mentioned at all!

My guess is that IPLD is not mentioned because it was introduced later, but it more or less maps to the Objects chapter in the paper. IPLD is broader, more general, than what the white paper specifies. Hey Juan, update the white paper will ya! :-)

If you don't want to wait for the updated white paper, have a look here: the IPLD website (Inter Planetary Linked Data), the IPLD specs and the IPLD implementations.

And this video is an excellent introduction: Juan Benet: Enter the Merkle Forest.

But if you don't feel like reading/watching more: IPLD is more or less the same as what is described in the "Objects" and "Files" chapters here.

Moving on to the next chapter in the white paper...

On top of the Merkle DAG objects IPFS defines a Git-like file system with versioning, with the following elements:

Now I hear you thinking: aren't these blobs, lists, and trees the same things as what we saw in the Mergle DAG? We had objects there with data, with or without links, and nice Unix-like file paths.

I heard you thinking that because I thought the same thing when I arrived at this chapter. After searching around a bit I started to get the feeling that this layer was discarded and IPLD stops at the "objects" layer, and everything on top of that is open to whatever implementation. If an expert is reading this and thinks I have it all wrong: please let me know, and I'll correct it with the new insight.

Now, what about the commit file type? The title of the white paper is "IPFS - Content Addressed, Versioned, P2P File System", but the versioning hasn't been implemented yet it seems.

There is some brainstorming going on about versioning here and here.

That leaves one more layer to go...

Since links in IPFS are content addressable (a cryptographic hash over the content represents the block or object of content), data is immutable by definition. It can only be replaced by another version of the content, and it, therefore, gets a new "address".

The solution is to create "labels" or "pointers" (just like git branches and tags) to immutable content. These labels can be used to represent the latest version of an object (or graph of objects).

In IPFS this pointer can be created using the Self-Certified Filesystems I described in the previous post. It is named IPNS and works like this:

I already showed the actual execution of the ipfs publish command in the post Getting to know IPFS.

This chapter in the white paper also describes some methods to make addresses more human-friendly, but I'll leave that in store for the next episode which will be hands-on again. We gotta get rid of these hashes in the addresses and make it all work nicely in our good old browsers: Ten terrible attempts to make IPFS human-friendly

Let me know what you think of this post by tweeting to me @pors!